Move It or Lose It

In the winter, people I encounter while riding my motorcycle often ask things like “aren’t you cold ?” and the classic “little coool out there, ain’t it ?”, which they deliver with that carefully long drawl that one might use with one who is too dim to know the dire fix he is in.

These questions are rooted in the curiosity about why someone would choose to ride a motorcycle when cars are ubiquitous and keep their users safer and conveniently climate-controlled. I get fed lots of theories, sometimes by folks who do ride, but mostly by ones who do not, about “wind in the face”, “thrills”, the ever popular “rebel”, “daredevil” and “death wish” and on and on. None of those are accurate. I have had people tell me that they have a convertible automobile, “which is just the same thing”. (I’ve had several convertibles : it isn’t).

The answer is “I ride because I have to.” When I was 10 years old, I took my first ride on the back of a motorcycle and the effect was instantaneous and permanent. I cannot imagine a life without doing it. It is what I do.

What it is, at its most elemental I think, is movement.

I am acquainted with a woman who climbs rockfaces, high in the air, hanging sometimes by her fingers. I’ve never asked her why, because I think I know. Several people in my circle fly airplanes, large and small. Others ride bicycles insane distances and in all conditions. And horses. And, and, and. It is, for all of us I think, movement of the body through space. The feel of it, the control of it, the pull it exerts on us, the physical need to have it.

When I am on a motorcycle, leaning into curves, tilting the horizon this way and that, I am at peace. Every sense is engaged, my attention fully occupied and my body is integrated into the machine. The bike is where I am comfortable. At my advanced age, a septuagenarian, sitting in a chair, standing at a counter, even walking, can be uncomfortable, often painful. But on a bike, I fit. My body settles into its familiar position (and that is, on the bikes I ride, the “ergonomic chair” arrangement where my feet are under my hips, spine straight, my weight on the ischial tuberosities, hands lightly on the bars with no grip needed to stabilize, rather than the “cruiser” style slouch, but that is a whole ‘nother article) and though sometimes there are pains and cramps I don’t really notice them. It is the movement, the gentle (or sometimes not) rocking back and forth of the turns, the rising and falling of the terrain, the feeling of everything that is out here with me, hot, cold, rain, snow, mist and fog. Back when I was young enough to ride at night, there was the experience of feeling the temperature drop as the bike descended into a dip and then increase again as we came out of it. The delicious reveal of the road ahead in the headlight’s beam with the next set of decisions to be made.

While I do enjoy the adrenaline hit of a well done curve at speed, speed alone isn’t a significant part of the experience. I’ve traveled at high speeds in a straight line on a racetrack and after the frisson of the first time, that isn’t exciting at all, it is the curves that count. I’ve gone 600 mph in an airliner and didn’t feel a thing. “Cheating death” is often offered, but that is not it in the least. While I agree with the sentiment expressed by Churchill when he said “nothing is quite so exhilarating as being shot at without result”, I certainly would not seek out such experiences. A leisurely ride down a country road also serves to quiet the craving.

In a car, enclosed in a steel box, I can be warm, dry, relatively “safe” and utterly, utterly bored.

In bad weather, cold, rain, even snow, the need for the movement continues. Like a caged animal needs to run, I need to feel the sensation of a motorcycle traveling from here to there. I ride with layers of clothes, heated gear and gloves, bundled up like an astronaut and just as awkward off the bike as they seem on an alien surface. But on the motorcycle, none of that is felt. Everything is in its place, doing what it should be doing and I am comfortable being me.

It is woven in the fabric of who I am. It is not all there is of me, but I would not be me without it.

if I could put it on a shelf when doing it is inconvenient, then perhaps I would…but I can’t. 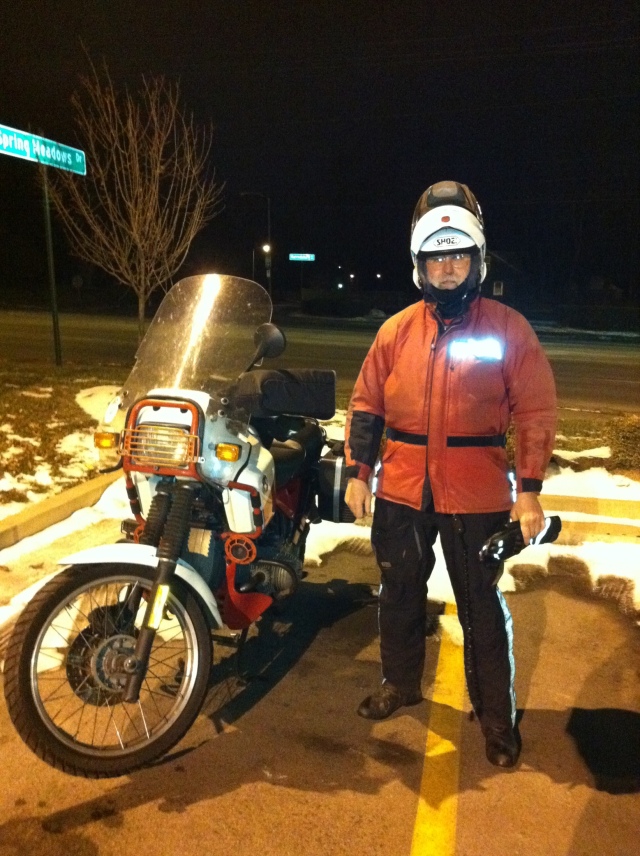